It's gearing up to be another great week here at Ellis!  Plans for our musical, The Timeline of Life, are coming together.  We will continue our work on this exciting production through the week.

Please be aware that we are returning to a "normal" work week with the following required assignments:

I'm excited to continue reading our novels as part of our small-group reading time.  I miss the characters in our books, and can't wait to see what happens next in the novels!  As we are reading, we will focus upon how the author uses point of view in telling the story.

Please study the following vocabulary words for a quiz on Monday, January 14th.


Abolitionist Movement- effort by many groups and individuals to end slavery in the U.S.

Frederick Douglass- Famous speaker, writer, newspaper editor, and reformer who had escaped slavery; his intellect and demeanor were proof for many slaves, once freed, could function as independent U.S. citizens
Underground Railroad- Network of abolitionists (like escaped slave Harriet Tubman), paths, and places that secretly helped slaves escape North of Canada

John Brown’s Raid- In 1859, John Brown and fellow abolitionists attacked a federal arsenal in Virginia and tried to start a slave rebellion; he was hung for treason and became a martyr
Discrimination-  to make a difference in treatment or favor based on something other than individual merit.
Abolish-  to do away with something

The Liberator- An anti-violence abolitionist newspaper first published in 1831, which is seen as the start of the abolitionist movement
13th Amendment of the Constitution- officially ended the practice of slavery in the United States

Communism- system where the government owns the factories and natural resources and controls the production of goods; people are not free

Iron Curtain- the imaginary dividing line between eastern and western Europe during the Cold War
Berlin Airlift- When U.S. and Allied airplanes delivered supplies to West Berlin every day for 321 days.
Aggression- attack against a person or country

Rocky Mountains- a major mountain system of the United states and Canada, extending 3,000 miles from Alaska south to New Mexico

Transportation barriers- physical features that make it difficult to travel or trade
Please focus upon the following word-study lists for a quiz on Friday, January 11. Be sure to note your new group as stated on your workplan.
Swirl Group:
ire- fire, hire, tire, wire, spire
ier- flier, crier, pliers, drier, brier

Star Group:
Long a in first syllable- basement, pavement, bracelet, raisin, mayor
Long a in second syllable- complain, amaze, parade, remain, escape
Arrow Group:
Add ion to base word (double consonant at end of base)- discussion, confession, impression, expression, oppression
Add ion to base word (single consonant at end of base)-  collection, subtraction, construction, connection, selection
Please sign up for a parent/teacher conference day and time, if you have not done so already.  Click HERE to choose your timeslot.

4th grade students will be attending a fieldtrip to the Jepson Museum on Friday with Ms. Tiia.  Spending part of your Friday looking at beautiful artwork is an awesome way to end your school week!

Finally, it's time to officially kick off this year's PTA Boosterthon Fun Run!  This year's theme is Mind Spark!  Be sure to register using school code 955-248 at funrun.com.  This will allow you to start collecting pledges that will go towards updating our playground!  The Fun Run event will take place on Friday, January 18.  But, there is a lot of exciting things planned leading up to the main event!  Check out the schedule: 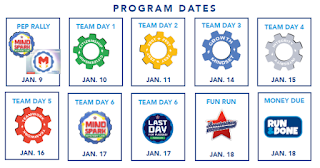 
Posted by Trent Kissinger at 9:44 AM