To introduce the concept of chemical weathering, I told the story of Hachiko.  Hachiko is considered to be one of the most loyal dogs that ever lived!  A bronze statue of him can still be visited at the Shibuya Station in Tokyo.  Chemical weathering, caused by thousands of people petting the statue's paws for good luck, has caused it to get worn down. 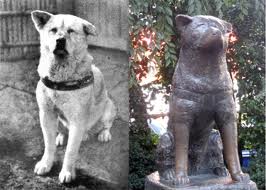 There's a great movie about Hachiko that was made a few years back. Here's the trailer.  The movie is available on Netflix.

Posted by Trent Kissinger at 5:18 PM