We are well on our way to finishing up the CRCT's!  This Monday is the science CRCT and Tuesday is the Social Studies.  Any make-ups will be done on Wednesday.  Keep your spirits up, we're almost finished :)

We will finally be able to get back to our normal routines after testing on Wednesday.  In math we will be using what we know about ratios and proportions to create scale drawings.  After some practice, we will try to recreate a larger-than-life masterpiece of our own!  I don't want to give away the piece we will use as inspiration, but here is a small glimpse of part of the painting. 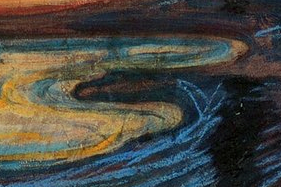 Do you think you can guess the painting is was taken from?  You'll find out the answer this week!

If you'd like to give proportional drawing a try on your own, check out this handy guide.

In science, we will continue our work with our connection to the world around us with a focus on natural resources.  I'll present the following information on Monday.


Please study the following words for a vocabulary quiz NEXT Thursday:

natural gas- a mixture of gaseous hydrocarbons located under the surface of the Earth, often near petroleum deposits; used as a fuel.

natural resource- any natural material that is used by humans, such as water, petroleum, minerals, forests, and animals.

bio mass- plant material, manure, or any other organic matter that is used as an energy source.

geothermal energy- the energy produced by heat within the Earth.

fossil fuel- a nonrenewable energy resource formed from the remains of organisms that lived long ago.

nonrenewable resource- a resource that forms at a rate that is much slower than the rate at which it is consumed.

renewable resource- a natural resource that can be replaced at the same rate at it is consumed.

hydroelectric energy- electrical energy produced by the flow of water.

The following choice sheet will guide your research of natural resources.  It is also due next Thursday.

My homeroom will also be taking some time this week to work on the upcoming musical.  Please think about the role you would like to have in the musical.  Would you like to be on stage or behind the scenes?  If you want to be on stage, what part would you like to play?  Please keep in mind that the narrator parts (Maria and Mario Montessori) will be played by 6th graders!

I'm excited to start the week with you,

Posted by Trent Kissinger at 1:43 PM